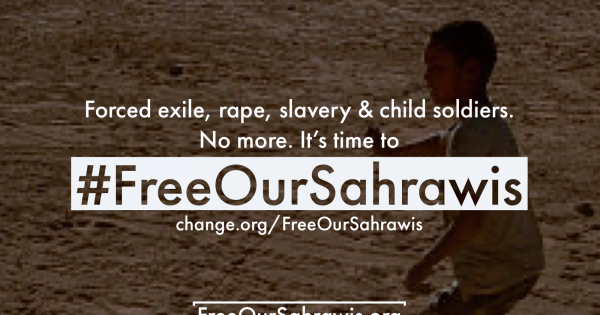 By continuing you agree to receive Avaaz emails. Our Privacy Policy will protect your data and explains how it can be used. You can unsubscribe at any time. If you are under 13 years of age in the USA or under 16 in the rest of the world, please get consent from a parent or guardian before proceeding.
This petition has been created by Mamoun A. and may not represent the views of the Avaaz community.
x

Complete the form below

In order to confirm that you are a human, please complete the form below

Sign this petition
Mamoun A.
started this petition to
United Nations Mission for the Referendum in Western Sahara
Since 1975, Sahrawis are in forced exile in the camps of Tindouf, a city located in the Algerian desert.
These Sahrawis are deprived of their most human rights, they are essentially forbidden, under the penalties of being killed , tortured , or persecuted to:
• Leave the camps
• Expressing their disagreements with the Polisario leaders
• Raped and forced into marriages to populate the camps and the militia

Concretely, the Polisario Front, classified by many countries as a terrorist organization, infringes almost all of the fundamental freedoms enshrined in the Universal Declaration of Human Rights.
This organization being hosted in Tindouf makes this persecution an issue on Algerian soil .
The Algerian government is, therefore, legally responsible for these violations of the 1987 Convention against Torture and Inhuman Treatment and their silence makes them accomplices.
Today, we call on the United Nations, the supposed overseer of this population in exile and its situation, to reconsider its position concerning the Tindouf camps. Moreover, the situation in the camps has worsened drastically with the Covid-19 health crisis. Sahrawis die without benefiting from the slightest medical care. Humanitarian aid intended for Sahrawis does not reach them entirely. In fact, this aid is often found marketed in the Algerian, Nigerian, and Mauritanian markets. We therefore also call on the United Nations to ensure the traceability of the help sent.

The daily lives of Sahrawis in the camps also consist of:
• The enrollment and indoctrination of Sahrawi children in the Polisario army, constituting an attack on their rights
• The fueling of regional terrorism through Algerian-funded weaponry which ultimately ends up in the hands of terrorist groups in the Sahel, such as Al Qaeda in Maghreb and the Islamic State in North Africa.
This leads us to call on the following NGOs and actors who we think could play a decisive role in the release of the sequestered Sahrawis, to get involved:
• The United Nations
• Islamic Relief Worldwide
• MINURSO
• Sahrawis For Peace
• Child Soldiers Initiative
• Amnesty North Africa
• Moroccan Association for Human Rights
• Child Fund International
• Black Lives Matter
• Plan International
• Worldwide Association for Childhood Protection
• End Slavery Now
• Anti-Slavery International
On Social Media, campaigns have demonstrated public outcry on the ever-worsening situation of Moroccans robbed of their land and identity. Find out more by visiting this hashtag: #FreeOurSahrawis

Report this as inappropriate
There was an error when submitting your files and/or report.
Inaccurate Inappropriate language Hate speech Illegal Commercial/spam Offensive